Though Tacos El Franc was established in 1996, its roots go back much further- all the way to the late 70’s. It was then that my father decided to take a chance and set up a humble taco stand by a busy Tijuana boulevard, in a little known area known as ‘El Soler’. Before that, he had been struggling to provide for my family as a farm worker in the fields of Central California. It was this struggle that propelled him into the taco business, determined to build a good life for us. 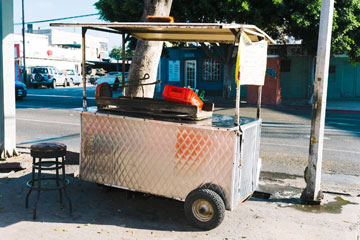 When my father first set up his taco stand, he never imagined it would take him to where he is today- owner of arguably the most renown taco shops in all Tijuana. That first taco stand was small and and nondescript. It could have easily gotten lost among the many others in the immediate area. However, it had something that the others did not. That is- exceptionally good tacos. Word slowly but surely spread, and before long, one could see crowds constantly gathered around my dad’s humble taco cart.

Within a couple years of operating his taco stand, my dad had gathered enough savings to open his first shop. It was 1982 when Tacos La Glorieta first opened, just a few blocks from where the stand served its first customers. It wasn’t a big or fancy taco shop, but it served the same great food on a consistent basis. It was then that the menu expanded to what it is today, virtually unchanged. From tender and juicy tacos de asada, to sizzlingly tasty tacos de adobada, to mouthwatering tacos de suadero, to tender steamed cabeza and lengua tacos, everything was and continues to be exquisitely prepared. 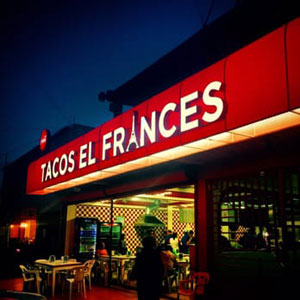 After several years of success with Tacos La Glorieta in the ‘El Soler’ region of Tijuana, my dad was ready to expand. He set his eyes on Playas De Tijuana, a small but growing beachside town directly south of Imperial Beach. It was the perfect location, especially considering there weren’t many competitors at the time.

My dad became so enamored with Playas, that he decided not only to build a business there, but also a home. As a matter of fact, he put the two of them together! From 1986 to about 1991, Tacos El Frances operated out of the family home. I remember throngs of clients every night, making a loud ruckus as they yelled out their orders.

I remember the smoke billowing from the carne asada grill, spreading the tasty scent of smoky meat. While many might not consider these sounds and sights beautiful, they were beautiful to me, as they represented the comfort of home.

In a short matter of time Tacos El Frances established itself as the premier taco shop in Playas De Tijuana, and one of the best in all the city. It just as quickly became apparent that the original site at the family home could not satisfy the high level of demand from customers. That’s when, in 1991, my dad decided to expand and take the taco shop across the street to the location where it sits today.

Tacos El Frances was a hit from the start. Perhaps it had something to do with opening day, when my dad decided to make all the tacos free! I remember that day like it was yesterday. It seemed like the whole town showed up for some free tacos. The place was so packed, one could barely move around. There was mariachi, a priest sprinkling his holy water, and a whole lot of commotion. From opening day to day, Tacos El Frances continues its popularity streak with consistent quality food and great service. 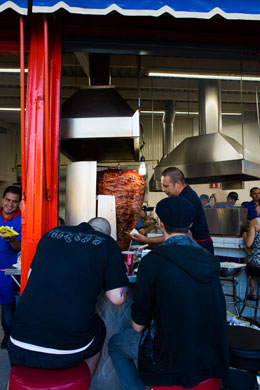 With both Tacos La Glorieta and Tacos El Frances thriving, my dad decided it was time to start considering a third location. He noticed a lot of Americans frequented the more well known Tacos El Frances, and wanted to cater to them with a taco shop close to the border. He found the perfect location in Zona Rio, Tijuana’s most modern business district. Even better, it’s only five minutes from the border. Just drive across from San Diego and you are practically there!

Tacos El Franc opened its doors in 1996. Though it took the public a little while to realize it was related to the first two taco shops, once they did, it quickly surged in popularity. Its location- close to the border and in an area with a thriving night life scene- makes it the perfect spot for both late night revelers and San Diego visitors.

Serving the San Diego and Tijuana border region since 1996. Email Us: